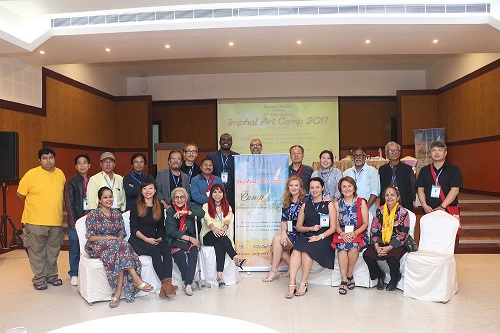 Long before the NE Brothers Entertainments Private Limited was established, a pure passion for Manipuri films and arts led to aggressive promotion of one of the best films of Manipur, Phijeegi Mani. This National Award winning film was extensively promoted and screened in Pune, Shillong, Mizoram, and Singapore. Seeing the positive response and success of this small initiative, the NE Brothers Entertainment Private Limited was launched with the vision of promoting North-East films, arts, literatures, cultures and music. As a full-fledged event management company, we organised our first event in 2013 – a North-East India musical tour of the renowned singer Jayanta popularly known as Tapta, at several locations of North East. Titled Chahi Taret Khuntakpa with the theme Reaching the Brotherhood once lost, the event was a huge success. The tour gave fans of Tapta to get up, close and personal with him. Since then, there’s no looking back.

We have conceptualised and organised several events including Likli-Gi-Lai, a musical evening with the legendary singer Sanaton, and 3rd Xenoh Corporate Football Challenge 2017.

The NE Brothers Entertainment Private Limited, for the first time in the history of Manipur, organised an art camp of international level in collaboration with associate partners, and sponsored by the Manipur Tourism Department, Government of Manipur. The 1st International Art Camp, held in June, 2017 at Slopeland Public School, Khongjom in Thoubal District, invited several renowned artists from Manipur, and other parts of India and Korea. The aim of the camp was to promote Manipur as an art hub and also as an artist’s destination.

The grand success of the 1st International Art Camp paved way for the 2nd International Imphal Art Camp, which took place in November 2017 during the Sangai Festival at the historical Kangla Fort. The main objective of the art camp is to promote tourism of Manipur through art. It was executed on a larger scale with participation of artists from Korea, Russia, Turkey and Haiti, besides the popular artists from Manipur and other states of India.

Apart from the personalised and corporate events, we have also organised national level programs including Digi Dhan Mela 2017, and also put up the Manipur Pavilion at the 105th India Science Congress 2018 held at Manipur University, with the support of state government.

From a small book launch or workshops to an international level events, we have successfully conceptualised, organised and executed all. We customise and design each event to create a lifetime experience. And we pay minute details in each and every component, be it sound, decor, lighting, and invest in creativity, technology, infrastructure, innovation, and most importantly quality to augment brand value.